"seeking to proclaim the Gospel and serve our local community"

Here is a brief summary of our history over the last 200 years …….

From the 17th century onwards, people in Lewes set up new independent churches to provide the form of worship they felt brought them closest to God.  There were frequent disagreements, splits, and reconciliations. These led to the establishment of several new churches including Eastgate Baptist (1784), Jireh (1805) and the Tabernacle(1816) , with the last becoming the town’s biggest church by the mid-19th century. 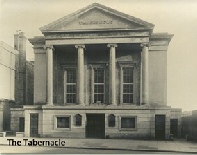 The Tabernacle opened in the High Street on 6 November 1816. It was owned by three prosperous traders who had previously worshipped at Cliffe Chapel, on Chapel Hill. Its establishment was driven by a desire to establish a prestigious chapel to be “more spacious, handsome and commodious than any of the chapels at present in use here”. The imposing building (see left) could house upwards of 1,000 worshippers, although the first congregations were much smaller.

During the first twelve years of its life, the Church was served by visiting ministers and theological students. Then, in 1829, the Revd. Evan Jones of Newport, Monmouthshire, came to Lewes and began a highly successful ministry which lasted for 33 years. A typical congregation in the 1850’s was said to be around 500 on Sunday morning and 550 on Sunday evening. The congregation that worshipped there later became known as Lewes Congregational Church

In 1901, the Tabernacle’s work with children had become so extensive that a separate ‘Tabernacle Sunday

School’ was opened behind the church and backing onto the river: that building is still standing in Railway Lane, next to what is now the Riverside Centre. The rose window of the Good Shepherd from that Sunday School was later incorporated into the apse of the present church building at Prince Edwards Road.

For some 90 years after the Revd Jones, the Tabernacle was served by a succession of ministers. However, by 1954, the congregation had become too small to sustain such a large building. The bold decision was taken to sell it and use the proceeds to build a modern church on the edge of the new housing developments in the Nevill / Wallands area. That building, now known as Christ Church, became Lewes United Reformed Church in 1972 and gained its present name when it linked with the Methodists (who themselves had come together from several 19th century strands)  in 1999.

The old Tabernacle building was demolished and its site is now occupied by the Superdrug and Vodafone stores in the precinct.

The church in Prince Edwards Road flourished and grew, and underwent major refurbishment in 2002-03, gaining a new hall that is much used by the local community.

Listen here to a recording of the ThinkTank talk on: Non-conformity in Lewes: the Tabernacle Congregation during 200 years by Dr Brenda Vance and Professor Norman Vance.

A series of booklets on the history of the church has also been prepared and can be downloaded below.